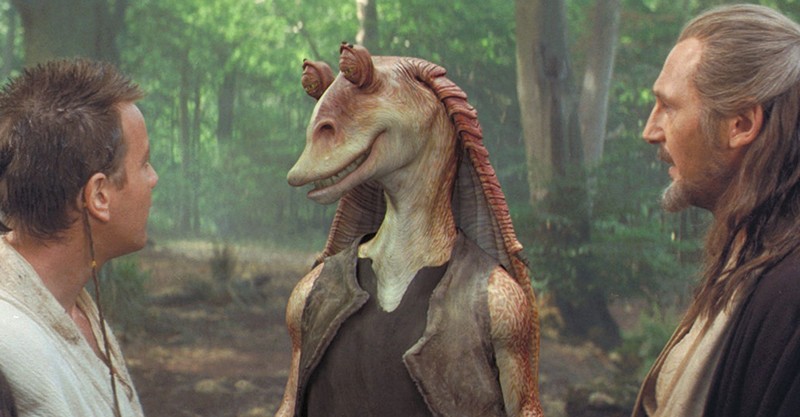 “Jar Jar Binks is the misunderstood, unsung hero of the Star Wars saga.

That might seem like an overstatement, but George Lucas created a clear thread of influence for the character from the beginning of Phantom Menace that extends all the way to the end of Return of the Jedi. Taking into account the chronological story of the films, there’s every chance that without Jar Jar’s story thread, the Ewoks might have never gotten into the fight against the Empire on the forest moon of Endor. […]

Qui-Gon could have left Jar Jar for dead there with Boss Nass, but he calls in the life debt that Jar Jar pledged to him. Even Obi-Wan is incredulous about this, viewing Jar Jar as pathetic. So why does Qui-Gon keep letting Jar Jar tag along? It’s the same reason he butts heads with the Jedi council: his connection to the living Force. His compassion is greater than the rigid and, frankly, arrogant views of the Jedi.

By keeping Jar Jar around for his goodness rather than potential worth, Qui-Gon enables Queen Amidala to see a side of the Gungans to which the prejudice of her people had closed her off. Because of this, Jar Jar brings her to the Gungans and unites their people. It saved Naboo, Gungans and Humans alike, from Palpatine’s machinations.

This is a classic story in mythology: the creature you’re nice to will unexpectedly help you in the end. Beauty and the Beast teaches the opposite version with the idea that the “worthless” person to whom you’re awful has the power to curse you. […]

By the time Revenge of the Sith rolls around, Jar Jar is as forgotten as the lesson he helped teach Qui-Gon. But during the dark times, what voice is left with Yoda to understand the failures of the Jedi? Qui-Gon.

This is why Yoda acts like Jar Jar when Luke first meets him. He’s the same sort of obnoxious clown whose power Luke doesn’t realize at all. Luke lashes out at him and Luke fails this test. That’s why Yoda doesn’t want to train him. […]

Return of the Jedi shows us this wiser side of Luke. When Han Solo was going to blast every single Ewok on the forest moon of Endor because they were annoying to him, Luke stayed his hand. They could have taken those Ewoks apart, but instead they allowed themselves to be captured and became their allies. […]

Jar Jar Binks is the lynchpin of the Star Wars universe and we hardly realized it. The only reason Luke learned this lesson was because Jar Jar taught it to Qui-Gon, who taught it to Yoda, who taught it to Luke. They defeated the Empire on Endor because Qui-Gon taught those who came after him you have to be nice to everyone, even if you find them obnoxious. Without Qui-Gon teaching this message of acceptance the galaxy would be a very different place.

It’s a stunning piece of storytelling that almost slid by, right under our noses.”