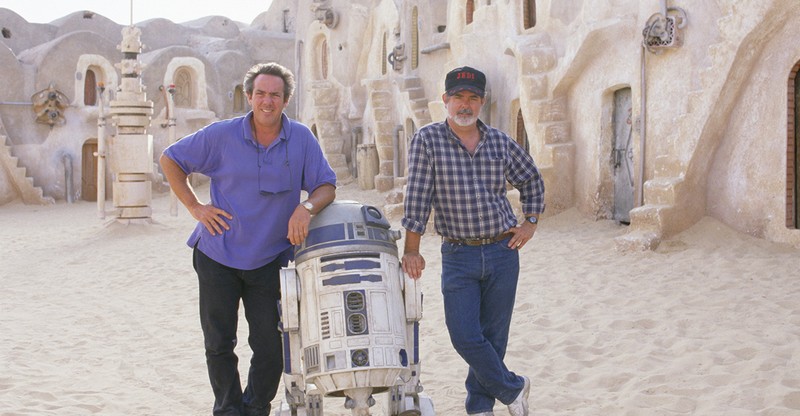 “It’s January 31, 1997, and you just walked out of Star Wars: Special Edition. The unadulterated joy coursing through your veins of seeing this classic blockbuster back on the big screen has completely compromised all capacity for critical thought. The Force is with you yet again. It’s with everyone. And this euphoric moment is but the prelude to the not-so-far-far-away glory of a brand-new chapter set to arrive in 1999. It is the greatest time in history to be a Star Wars fan.

Even better, this is the future, and you are one of 70 million people on the planet privileged with access to the World Wide Web. So you get that dial-up modem crooning in the key of 28.8 kbit/s, and within minutes, are scouring the net for every existing scrap of Star Wars: Episode I news. Hyperspace to 4 in the morning: you’ve been hunting down details for hours, and what you’ve gleaned from the prominent rumor aggregators, the web 1.0 successors toStarlog, Fantastic Films, Cinefantastique, and other 1980s fan mags, has only left you starved for more. That’s when you discover a lone, confident voice cutting through the clueless din of fanboy speculation. He claims to own a copy of the Episode I treatment; he swears he has a direct line to George Lucas; and apparently, he has clearance from Lucasfilms to post just anything he pleased on his Tripod-hosted website, “Dark Side Prequel Rumors.” This guy knows everything.

His name was SuperShadow, and years later, it would be painfully apparent that he knew nothing, save for how to hoodwink Star Wars fans drunk on the promise of Episode I. Not everyone would believe him, but enough people bought into the ruse to make SuperShadow the phantom menace of movie news webmasters, and Lucasfilm itself, for a solid decade. Relentlessly inventive, SuperShadow told his readers precisely what they wanted to hear from his place next to Emperor George’s throne. When the majority of the online community screamed bullshit, he “brought out” Lucas for a series of interviews, like Woody Allen fetching Marshall McLuhan in Annie Hall. In character as someone in the know, SuperShadow would spend long days online conducting proto-AMAs with his adoring fans who, over the years, began to communicate in the same busted-robotic syntax as their favorite movie-news manufacturer.

Today, SuperShadow’s 1+1=anything-but-2 microcosm is pervasive across all subjects and disciplines. He was an early purveyor of “FAKE NEWS,” hooking naïve Star Wars fans with his illusory access to the Great Creator of the Galaxy Far, Far Away. He took advantage of Lucas’s secretive process to become a Jedi Harold Hill, selling lightsabers to true believers. But to what end? Twenty years after stumbling across his exploits in LucasLand as a reader of (and soon-to-be contributor to) Ain’t It Cool News, I’m still trying to make sense of the mad-sad ambition and maniacal diligence that SuperShadow poured into this doomed undertaking. Be it the product of delusion or sheer hucksterism, this was someone’s broken life’s work. […]”

Read the whole story at Thrillist.