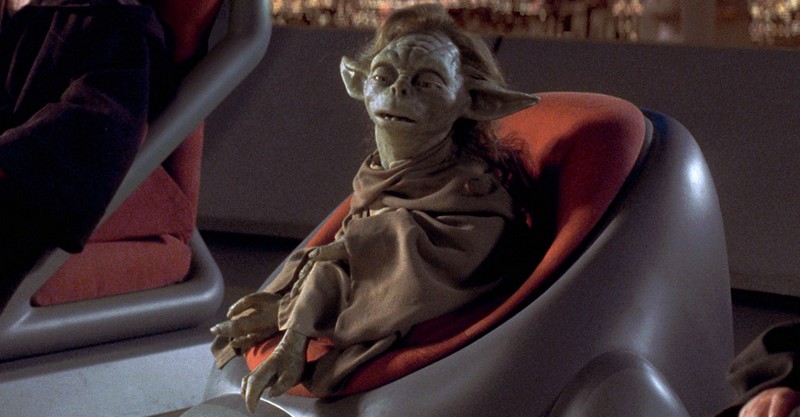 “Star Wars games like Galaxy of Heroes and LEGO Star Wars include hundreds of characters. Some are popular, like Han Solo or Darth Vader. But many of these games also include lesser-known or obscure characters, like Bib Fortuna. Yet after decades of Star Wars games, everybody keeps omitting a character. A Jedi Master who sat on the Jedi Council, who was incredibly wise and patient. I’m talking of course about Yaddle. Why is she being overlooked and how can we fix this?

Yaddle is a Jedi who is of the same species as Yoda. What species is that? Good question, Star Wars lore has never really given Yoda or Yaddle’s species a specific name or history.  […]

Like Yoda, Yaddle was a powerful Jedi who was also incredibly smart. And yes, like Yoda she also spoke a bit weirdly, mixing her words around. But Yaddle wasn’t just a female version of Yoda. In her Legends history she was a brave and fierce warrior Jedi, who could handle getting tortured without giving up any information. She also spent 100 years in isolation, fighting off giant creatures with a wooden stick and surviving on scraps of food. Of course almost all of Yaddle’s original history is now non-canon, but she herself is still very much canon.

Yaddle made her first appearance in Star Wars Episode I The Phantom Menace. She is seen as a sitting member of the Jedi Council. She was there when a young Anakin was brought in front of the council for testing. And here’s something to think about: When she was on the council, they correctly told Qui-Gon, the Jedi who found Anakin, that he shouldn’t train the young boy.

But, in Attack of The Clones, Yaddle is no longer on the council. In fact, she is never seen in the films again. What happened when Yaddle left? The Jedi trained Anakin, helped him, allowed him to get close to Palpatine and eventually got destroyed by the Sith master and his new apprentice, the former Anakin, now known as Darth Vader. Whoops!

Yaddle leaves for a vacation and the entire Jedi Council collectively screws everything up. Good job, Yoda.

Where was Yaddle during the rest of the prequel trilogy? Originally in Legends she died after sacrificing herself to stop a bio-weapon, saving an entire city in the process. However, in the new canon she now just decided to leave the Jedi Council and take a break from Jedi affairs. Maybe she got tired of Yoda and Mace Windu? Yaddle has recently appeared in the new Star Wars comics, but I won’t spoil that for anyone who, like me, cares about that stuff.

So, now you know what I know: Yaddle is a bad-ass Jedi warrior, incredibly smart, appeared in the first film on the Jedi Council and in the old canon saved an entire city by sacrificing herself. And yet, she has never appeared in a video game. Not even in a small cameo. […]

EA keeps canceling Star Wars games, so they might need a pitch for a new one. Here’s my pitch: Yaddle: A Star Wars Adventure. You play as Yaddle and fight things and other stuff happens. Look I’m not a game designer, but I think it could work.

The year is 2019 and I believe we are ready for a Yaddle renaissance. Your move Disney.”