“Starting March 26, the forces of the Galactic Republic and Separatists clash in Capital Supremacy* – an immersive, Clone Wars-era authentic experience in Star Wars™ Battlefront™ II – where non-linear ground battles fuse with the thrill of invading capital ships and taking them down.

Along with the update, we’re releasing our latest location, Pipeline Junction West on Geonosis, plus the Separatist Dreadnought and Republic Attack Cruiser capital ship interiors – all serving as settings to the dynamic and tactical warfare of Capital Supremacy. 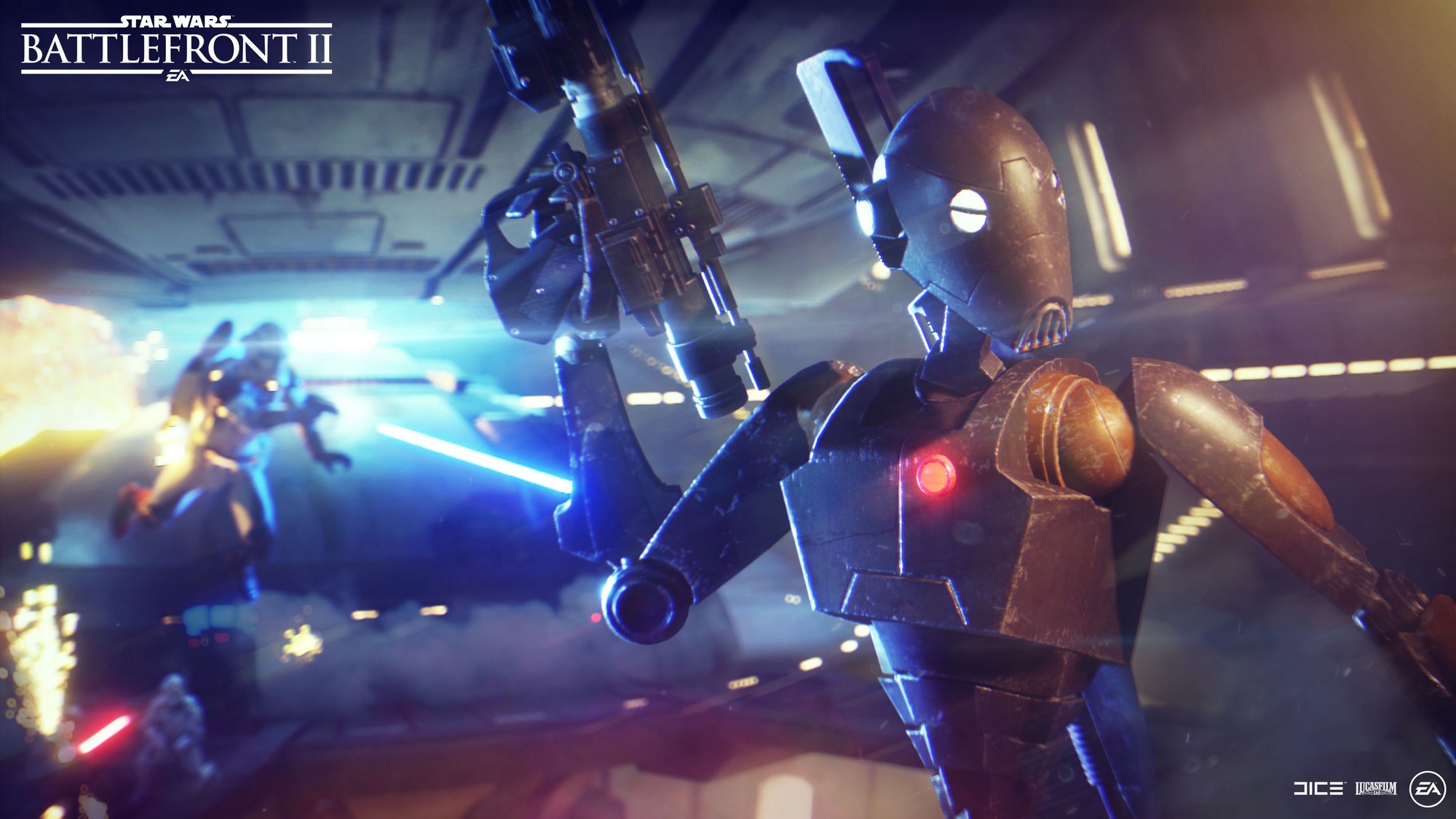 Now, let’s dig into how a round of Capital Supremacy goes down.

The looming capital ships overlook the scenery where players deploy into the thick of the Clone Wars. They enter an open-ended warzone accompanied by vicious blaster fire, calculating droids, and morale-boosting rallying cries.

Two teams of 20, aided by 12 additional non-human, AI controlled troopers on each side, fight to control a majority of five command posts on the ground. It’s an intense and open-ended conflict, where you can utilize a wide array of tactics, trooper classes, land vehicles, reinforcement units, and hero characters to attack and defend different areas across the surface.

Hold on, did we just announce the presence of AI controlled troopers in Capital Supremacy? That’s right, for the first time in any PVP mode in Star Wars Battlefront II, AI ground troops will battle alongside and against you, contest the command posts, and be additional targets for the players to rain fire upon – upping the intensity of the combat even more!

The struggle for area control now turns into a race towards two incoming transport shuttles. For each attacker managing to run the gauntlet and embark on any of the shuttles, additional tickets are given.

The total amount of tickets feeds into how many reinforcements the attackers have at their disposal in the upcoming Invasion Phase. Consequentially, the defenders must do everything they can to stop the other side from strengthening their invasion force.

Once the transport shuttle boarding timer runs out, a cinematic sequence will depict the transports ascending with the attackers to invade the Republic Attack Cruiser or the Separatist Dreadnought.

The mission is now to destroy – or crush the invaders’ attempt at doing so – the capital ship from the inside. Attacking as the clones and the heroes of the Clone Wars, you’ll take on the Separatist Dreadnought, while on the side of the Separatists and villains, you’ll be looking to abolish the Republic Attack Cruiser.

The AI troops will stay grounded, leaving the close-quarters Invasion Phase to be fought between players exclusively.

The layout and look of the two ships are, as you would expect, meticulously modelled to represent the two Clone Wars-era factions. Inside the Separatist Dreadnought, you’ll see MTTs painted with the Separatist grey and blue color scheme, fight throughout the droid deployment bay, and attack or defend the ship’s weak points: the cooling vent chambers. The dagger-like Republic Attack Cruiser, on the other hand, features its own unique areas, such as the cargo bay and reactor core chambers.

Independent of the faction being invaded, the ways to go about the objectives are similar. As an attacker, you need to fight your way out of the hangar and breach the first line of defense by overriding one of two security consoles. This will grant access to the hallways leading to the two chambers hosting the ship’s weak points.

If the attackers manage to arm the charges on both – and hold the line until the timer expires – they can celebrate the victory as the enemy ship plunges towards the ground.

But here’s the twist: if the defenders manage to eliminate enough attackers to deplete their reinforcement tickets (this is why the extra tickets earned by boarding the transport shuttles can be so decisive), the battle goes back to the Ground Phase.

Back on the ground, the fight over command posts starts over, giving the team who just defended their capital ship a chance to make a glorious comeback. As a successful defense bonus, they’ll get a head-start by controlling a majority of the command posts upon returning to the surface, earning reinforcements immediately.

But any progress made by the team attacking the first time around will not be in vain! Should they manage to launch another invasion, any overridden console or destroyed weak point will still be, well, overridden or destroyed.

With dynamic shifts between the open-ended Ground Phase and the attacking or defending of two unique capital ships in the Invasion Phase, players are able to take on a tactical, Clone Wars-era authentic tug of war – where they have the agency to tackle combat scenarios in many different ways.

At release, Capital Supremacy will be playable on Geonosis’ Pipeline Junction West and the two capital ships. This new location features rolling sand dunes, characteristic cliff formations, areas contaminated with toxic waste from the close-by droid foundries, and a mysterious boneyard where you’ll find the remains of large creatures from across the galaxy.

To summarize: fight in non-linear, high-agency ground battles to control command posts. Gain reinforcements. Rush to one of the pick-up-zones and board a shuttle to invade the looming enemy capital ship. Push through its hangar and hallways to reach its weak points. Arm the charges and hold the lines. Rejoice as the giant nose-dives towards the planet.

That’s how triumph looks like in a game of Capital Supremacy, coming March 26!”