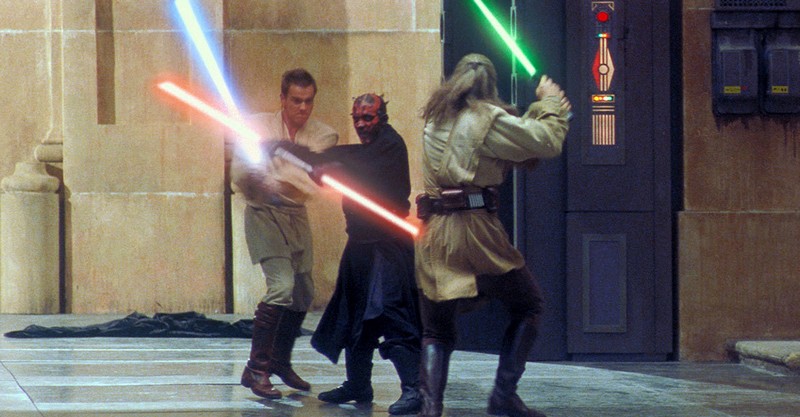 ‘Duel of the Fates’

Perhaps the most iconic piece of the film’s score, “Duel of the Fates” on the surface exemplifies what George Lucas himself described as “the prime of the Jedi” with its epic lightsaber combat. Its blend of the choral and orchestral styles literally sends musical tremors across the saga.

“The medium of chorus and orchestra would give us a sense that we’re in a big temple,” Williams himself explained in an archival clip which Collins shared. “The decision to make [“Duel of the Fates”] choral was just the result of my thinking that it should have a kind of ritualistic or quasi-religious feeling,” he continued. “The drama is a contrast and a contest between good and evil. This lore taps into some kind of collective memory that we all have, which is itself what the definition of a myth is.”

This “ancient, primal” composition, as Collins added, is like a ballet, such as Igor Stravinsky’s “Rite of Spring” from 1913. In this case the choreography is courtesy of stunt coordinator Nick Gillard and the dancers carry lightsabers. It was also a topical choice on Williams’ part, Collins argued, citing the prominent use of the well-remembered choral piece “Carmina Burana” from 1937, which was very commonly used in 1990s movie trailers.

But what would the chorus say? Collins explained that Williams chose a passage of translated Celtic poetry from Robert Graves’ noted book, “The White Goddess.” The poem, entitled “The Battle of the Trees,” read:

Under the tongue root

A fight most dread

Behind in the head

It seemed to hint at an internal struggle, “something bigger than what is physical, something spiritual,” as Collins said. Williams reduced that to the phrase “dreaded fight,” which is repeated over again in “Duel of the Fates.”

But what language to use? Sanskrit was Williams choice. It possessed “good, pure vowels” as Collins noted, similar to Italian, one of the classic operatic languages, and unlike English with its more inconsistent pronunciations. Sanskrit ensured that there would be very little variation from the chorus.

At his keyboard, Collins demonstrated how Williams’ iconic original trilogy scores, the Force theme and the “Imperial March,” are subtly incorporated into “Duel of the Fates.” Similar chord structures and even the same melodies are layered into the climactic score. All one has to do is listen closely and compare.

Collins’ describes this technique as “prequel writing,” where the composer — working backwards in the storyline — establishes a continuity that is present across the entire saga. He stressed that much of this “backwards writing” was not completely deliberate on Williams’ part, but was derived from his adoption of the same vocabulary of sounds used in the original trilogy.

If “Duel of the Fates” gets most of the attention to this day, “Anakin’s Theme” is an equally important albeit lesser appreciated selection from the Episode I soundtrack. This “wonderfully complicated” theme, as Collins put it, tells the whole story of Anakin’s modest origin, hopeful journey, and ultimate doom.

Thematically, it’s “all over the place,” and “not hummable” in the way more recognizable Star Wars themes are. But don’t allow its complexity to be misleading. This “poetic conceit,” as Collins described, combines most of the essential musical components of all the succeeding Star Wars scores.

Fragments of the “Imperial March,” for example, are quite noticeable, and oh-so-foreboding, at the theme’s conclusion. Other rhythms and intervals from the Force theme and Yoda’s theme among others are layered within.

Another poignant note was that Williams and Lucas chose to conclude the end credits of The Phantom Menace with this soft, subtle rendition in contrast to the typical, bombastic finales of the other Star Wars features. It all hints at the myth that is to play out. It’s that “prequel writing,” or writing backwards that Collins so keenly identifies.

Collins fittingly ended by addressing the score’s finale of the grand parade march and celebration on Naboo. Amazingly, and appropriately, this iconic march takes the same rhythmic shape as the Emperor’s theme from Return of the Jedi, only in a different key. The “phantom menace” himself has the last musical word, and as Collins jokingly colored in, “You think it’s a victory, but it’s not… Enjoy the wonder and the humor because you won’t get it this way again.””