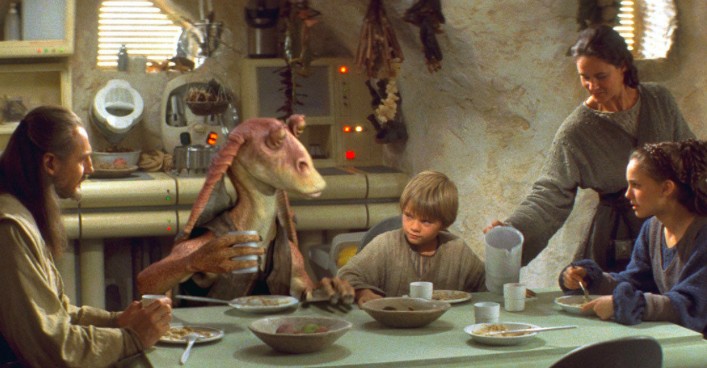 “The last big panel at Star Wars Celebration was a 20th anniversary retrospective of Star Wars: The Phantom Menace. The maligned prequel that kicked off a new era of Star Wars after a 16-year hiatus from the big screen hasn’t ever been considered a bright spot in the saga’s history. But 20 years later, fans who grew up on Episode I seem to have a special place in their heart for the movie.

The crowd at Star Wars Celebration gave The Phantom Menace anniversary panel a warm reception. It probably didn’t hurt that Emperor Palpatine (Ian McDiarmid) and Darth Maul (Ray Park) were in attendance, not to mention some of the key crew members who have made the modern era of Star Wars what it is today. But George Lucas also sent in a personal message talking about his love for The Phantom Menace, and doubling down on his love for Jar Jar Binks. Plus, some interesting cameos you might not have known about were revealed and much more.

The Phantom Menace 20th anniversary panel started off with a retrospective look back at the development and making of the film. Hosted by Warwick Davis, the discussion featured visual effects supervisor John Knoll, viewpaint supervisor Jean Bolte, design director Doug Chiang and supervising sound editor Matthew Wood talking about how much George Lucas pushed them beyond their limits with what he wanted to accomplish with The Phantom Menace.

Regardless of how you think about Episode I with regards to its quality as a film, you can’t deny the important place this movie has in Star Wars history. The first prequel is what gave way to Star Wars Celebration itself and the revival of the classic saga in a much bigger way. It helped bring Star Wars to a new generation, and it advanced film technology at large, ushering in a new wave of blockbuster filmmaking.

Furthermore, even though George Lucas may not be the shepherd of Star Wars any longer, his influence and style is still present through those he mentored while working on the prequels. Everything that John Knoll, Doug Chiang, and Matthew Wood bring to Star Wars today comes from what they learned from Lucas giving them an opportunity to rise to the challenge of his vision for The Phantom Menace, and they all echoed those sentiments when referring to the Star Wars projects they’re working on today, from Rogue One to The Last Jedi. And even though Jean Bolte doesn’t work on Star Wars movies anymore, her talents are still firmly in place at ILM with work on movies like Iron Man, Transformers: Dark of the Moon, and Avengers: Age of Ultron. […]

And in case you think George Lucas is still crazy for proclaiming Jar Jar Binks as one of his favorite characters, when Ahmed Best came to the stage during this panel, the crowd gave him some of the biggest cheers of the day. That might be because he’s had a rough go from the more vicious fans who hated The Phantom Menace, but it honestly seems like it’s because there’s a new wave of Star Wars fans who have come to appreciate the prequels for what they are. These are Star Wars fans who just love Star Wars. […]”