George Lucas comes on the scene at 2:45, Hayden Christensen and Ian McDiarmid at 22:40.

“Thousands of voices cried out and were suddenly silenced Thursday — awestruck as 40 years of galactic history united on stage before them.

The event was hosted by Warwick Davis, who was just a boy when he played Wicket the Ewok in Return of the Jedi and most recently appeared as a tiny Rebel warrior in Rogue One. Also in attendance were Billy Dee Williams, Hayden Christiansen, Ian McDiarmid, and Lucasfilm president Kathleen Kennedy.

Ahead, highlights from the event as it happened in real-time. […]

— Lucasfilm president Kathleen Kennedy opens the panel — wearing a Star Wars t-shirt with her silver pantsuit. “The greatest honor for me is to acknowledge the man whose collective genius brought us all together,” she says. Before she can finish, “Please welcome …” the audience is already on its feet. George Lucas is here.

Gigantic cheers for the father of Star Wars, who has stepped back from the productions after selling the company. “We love you George!” and chants of “Lucas! Lucas! Lucas!” greet him.

“Does that always happen when you walk into a room?” Davis asks.

Reflecting on the origins of Star Wars, Lucas describes struggling to impress studio heads with his rock ‘n’ roll coming of age story American Graffiti, then trying to sell them on his outer space adventure, which he jokes he described as “Dogs flying space ships.” Ouch, Chewbacca.

— Dave Filoni, executive producer of The Clone Wars and the current Rebelsanimated series, joins Lucas on stage. He says the Yoda-like advice he got from Lucas was “Never make a decision out of fear.” 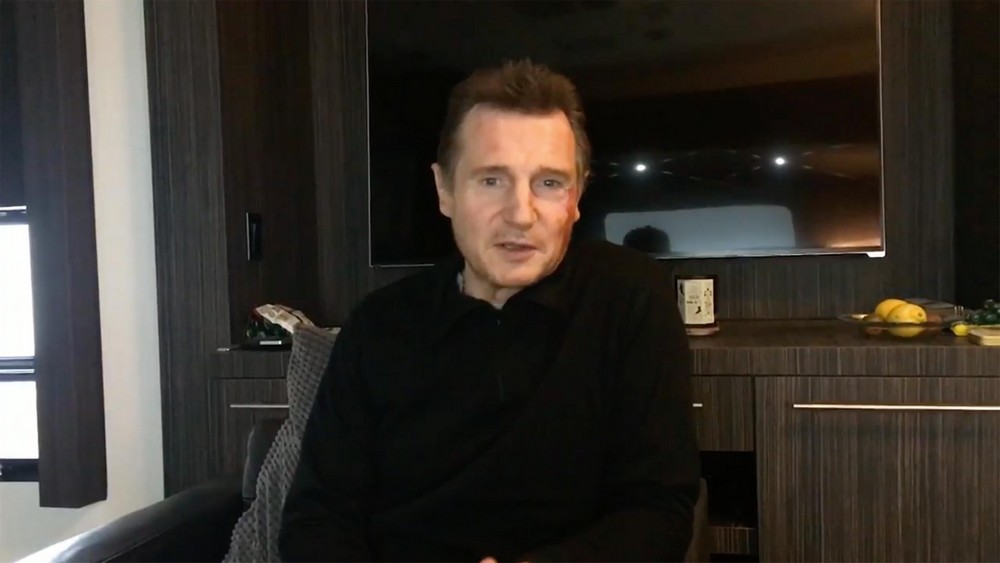 — Qui-Gon Jinn makes an appearance. Liam Neeson appears via video from the Canadian Rockies where he is in bloody make. “We’re making a movie, a very unofficial movie, about Jar-Jar Binks. Spoiler alert: he did go to the dark side.” The video ends with, “May the Force be with you.”

— Lucas welcomes two “Dark Side rock stars” as The Emperor, Ian McDiarmid, and Anakin Skywalker, Hayden Christensen, join the panel. Lucas says McDiarmid is “one of the loveliest people in the world. He’s nothing like the Emperor.” 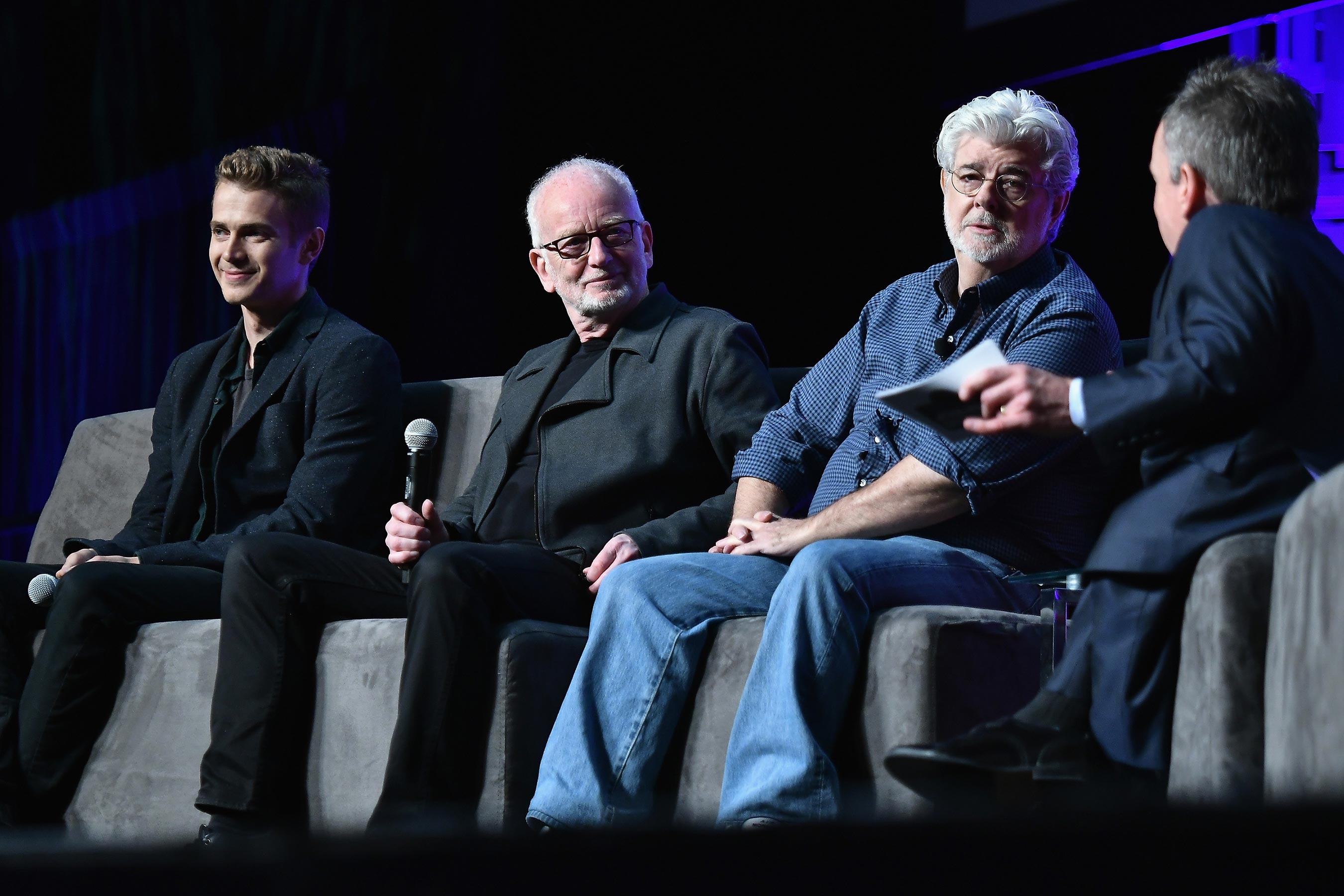 Christensen and McDiarmid both agree their favorite scene was the opera seduction when Palpatine persuades the future Darth Vader to turn against the Jedi. The younger actor says growing up with Star Wars makes it tough to stop making the “waaaannh, waaahn” lightsaber sound during fight sequences.

McDiarmid recalled the audition process for 1983’s Return of the Jedi. “George doesn’t go into lengthy explanations,” he says. “We met briefly with Richard Marquand over lunch. I went home and the phone was ringing and my agent said, ‘You’ve got the part.’ I said, ‘Great… what’s the part?’” He says his agent riffled through some papers and said: “Apparently he’s called ‘The Emperor of the Universe.’”

When he was brought back for the prequels, McDiarmid said he was disappointed to play Palpatine because he liked the mysterious Darth Sidious better. “I thought, ‘I wish I was playing that character. Then I found out, I was playing both of them.” 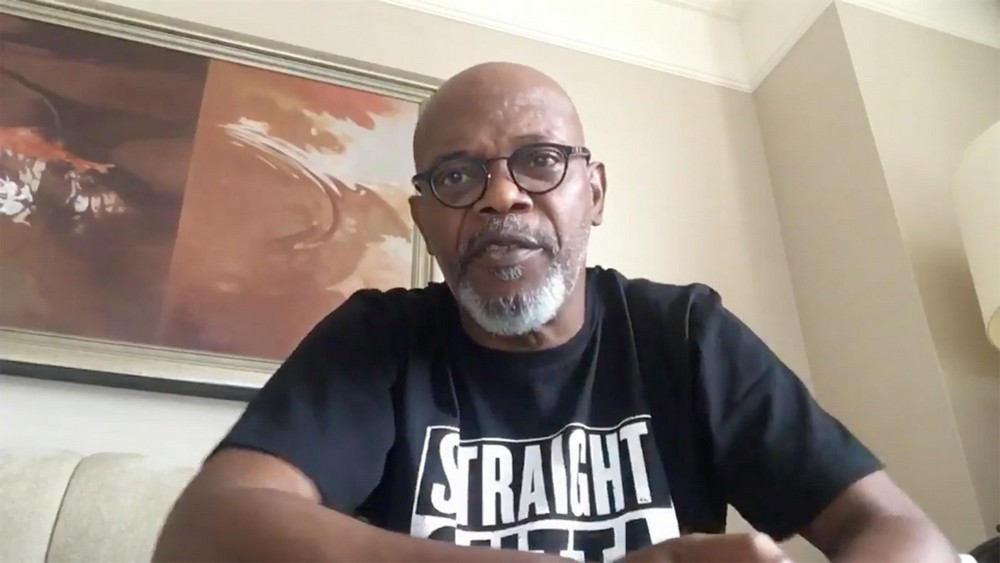 — Now a video from Samuel L. Jackson, who played Jedi elder Mace Windu in the prequels. He was last seen in Revenge of the Sith getting hurled from a window but used this panel as a chance to argue for a comeback. “We know Jedi can fall from incredible heights and survive. I am not dead!” Jackson declared. “We know a long rich history Star Wars characters reappearing with new appendages. Mace Windu is awaiting his return.” […]

— Kennedy and Lucas remain onstage. Carrie Fisher is gone, but they pay tribute to her in spirit. “We can’t celebrate 40 years of Star Wars without remembering our beloved princess,” Davis says.

“Carrie Fisher, I said … I said many times now, she really is a modern woman, and she isn’t just a woman where you put guys clothes on her and she becomes a hero,” Lucas said, his voice breaking briefly. “She was a princess, she was a senator, and she played a part that was very smart. And she had to hold her own with two big lugs, these goofballs who were screwing everything up. But it was her war.”

Fisher often called herself the “custodian of Leia.” Lucas went further: “She wasthat character: she was very mart, very funny, very bold, very tough. There are not very many people like her. They’re one in a billion.”