From The Daily Dot:

“Reddit calls itself the “front page of the Internet,” and that ambitious tagline sometimes rings true. Many of 2017’s major meme trends were entirely driven by Reddit. For proof, you only need to look as far as the biggest of Reddit post of the year: a Star Wars prequel meme.

Reddit says its most upvoted post of the year—the one with the most people approving—was an attempt to make a picture of Chancellor Palpatine show up on Google’s search rankings for “the senate.”

The much-maligned Star Wars episodes 1 through 3 found new, ironic respect on Twitter this year. Episode 3, Revenge of the Sith, was a particular favorite. The biggest (death) star of all was Palpatine, who made himself emperor with the help of useful idiot Jar Jar Binks, and the Senate couldn’t stop him. Why? Because “I am the Senate!” 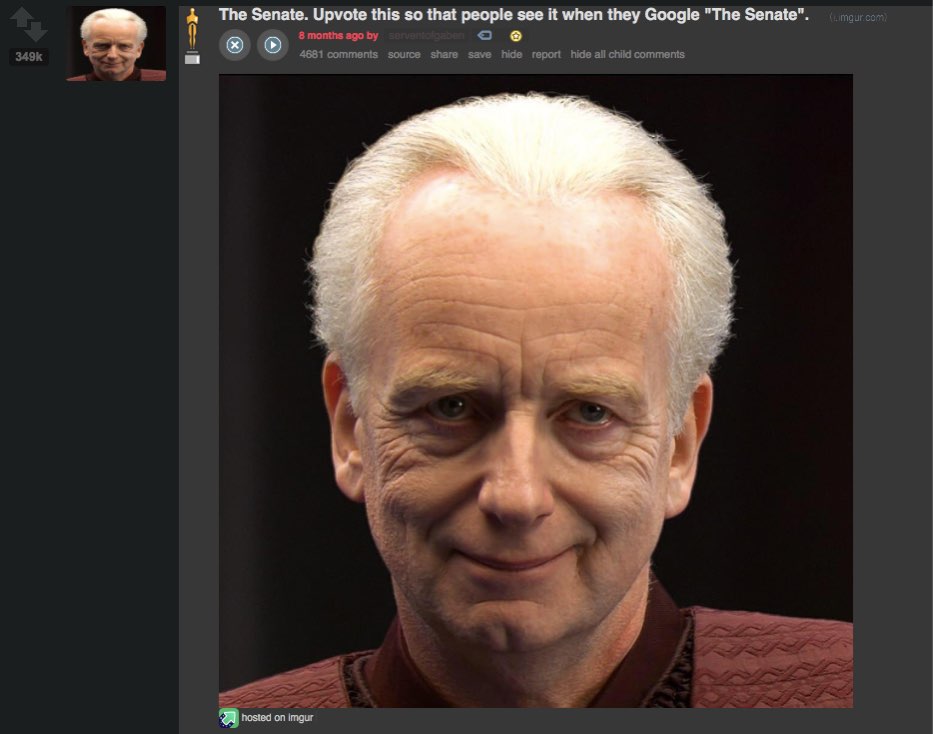 The post is a coup for the subreddit r/movies,  the 11th largest community on the site. Its success is a testimony to the popularity of prequel memes, which dominated meme-themed subreddits like r/dankmemes and r/me_irl but also spread to more mainstream parts of Reddit.

Despite the popularity of the image, the plan it represented didn’t work. The photo of Palpatine doesn’t appear on the first page of Google image results for “the senate.” However, a different Palpatine pic, hosted by Know Your Meme, does rank in the top 20, surrounded by photos of U.S. senators.

There’s also a prequel memes subreddit, created five days before the end of 2016. Reddit’s year-end list notes that, if it had been launched a little bit later, it would be the second largest new subreddit of 2017. Sequelmemes, a spinoff Star Wars meme sub, narrowly missed the top 10 list of new communities.”