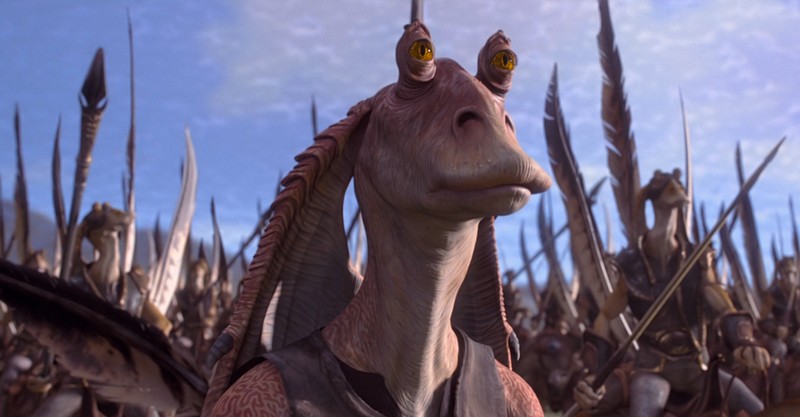 “[…] All that remained to be seen was the exact make-up of the new instalment. We knew about the dry characters of young Obi-Wan and Anakin Skywalker, and it didn’t take an X-Wing mechanic to guess that Liam Neeson’s Qui-Gon Jin might not be a rollicking gag-fest. Who would provide the comic relief?

Jar Jar Binks, that’s who. A plucky but awkward Gungan: an amphibious biped with a heart of gold and the voice of a rasta on laughing gas. We met him just as he had been exiled by Boss Nass, the Gungans’ blimp-like ruler, for his clumsiness. Qui-Gon saved him from being run over by a spaceship in the woods. “Oh boy boy I luuvvv youuu,” said Jar Jar, pledging his service as a debt of gratitude.

A star should have been born – Rolling Stone magazine put him on the cover, with the headline “Jar Jar Superstar”. But what came into existence was a black hole, an inescapable anti-mass that became a locus for everything people hated about the new trilogy. Web pages were set up, listing ways to kill him. Ahmed Best, the actor who had the misfortune to play the character, recently admitted he “almost ended my life” in the wake of the backlash.

The critic Daniel Kimmell published a compilation of writing with the title Jar Jar Binks Must Die. George Lucas was picketed at events. Satire abounded: the Onion ran a story with the headline, “80 Billion Tons of Jar Jar Merchandise Now 70 Percent Off”. Jar Jar was proof that George Lucas had lost touch with what made Star Wars great.

More severely, there were accusations of racism. The American scholar and race theorist, Patricia Williams, said that Jar Jar’s character was reminiscent of the archetypes portrayed by blackface minstrels. Others said he traded on stereotypes of lazy Caribbean people. Lucas denied the accusations.

“How in the world you could take an orange amphibian and say that he’s a Jamaican? It’s completely absurd,” he told Kirsty Walk on Newsnight. “Believe me, Jar Jar was not drawn from a Jamaican, from any stretch of the imagination.” Still, surprised and hurt by the criticism, Lucas re-wrote Jar Jar’s parts in the following two films to minimise his contribution.

The loathing was so widespread that it is tempting to think it was universal. But it wasn’t, quite. Roger Ebert, in his very positive notice of The Phantom Menace, didn’t think Jar Jar worthy of criticism (and he had been sceptical about Chewie). Reviewing the film for the Telegraph, the novelist Andrew O’Hagan praised the Gungan debutant: “Jar Jar is the new star. A wise-cracking, pony-headed, flarey-nostrilled, slack-mouthed beast with giant feet and hands like shovels, he comes into our lives as someone who knows the ways of the universe a little better than the rest of us… He will soon be as loved as Winnie-the-Pooh.”

O‘Hagan says that he still stands by his judgment. “I might have overstated the case a bit with Jar-Jar,” he tells us. “But it surprised me that he wasn’t loved. I think children are now less impressed with awkwardness than they once were. A lot of my childhood heroes were ungainly and unlovely, but they had character. I liked Jar Jar for being a bit of a clod-hopper. But few other people did. In a way he was an old-fashioned kind of character who was willing to get on your nerves.”

He wasn’t the only one to be surprised by the response. Ahmed Best, who voiced Jar Jar and helped with his movements, thought he had landed the plum gig: the first completely computer generated main character in cinema history, in the biggest franchise on earth. (Michael Jackson had apparently been keen for the part, too, but Lucas felt his presence would be a distraction.)

“[The criticism] hurt a lot,” Best said in a 2014 Reddit interview. “You put your heart and soul into something groundbreaking for two years and it gets slammed, that hurts.” A lot of his inspiration came from silent film, he added. “George and I would watch a lot of Buster Keaton together and he would tell what he liked and what he wanted. The final battle scene in Phantom Menace is almost all Buster Keaton.”

He has taken the Jar Jar hate with good grace, and said he would have done it all again. “I’m a skinny kid from the Bronx. I’m not supposed to be alive, let alone a pro artist. Opportunities like Star Wars come once in a lifetime. Those are the ones you say yes to.”[…]

JJ Abrams, director of the eighth Star Wars film The Force Awakens, has kept the hatred going by recently telling Vanity Fair that he wanted to “kill off” Jar Jar by showing his bones in the background of a desert scene. But watching the films now I find it impossible to dredge up the loathing for him I felt 15 years ago, when hundreds of hours of X-Wing vs TIE Fighter meant I thought of Star Wars as a kind of high-tech gothic Battle of Britain to be treated with great reverence.

I was wrong. Jar Jar was hated because people thought he was out of place, but the opposite was true. The same people who went online to list ways to murder him are those who take the garbled mutterings of an antediluvian swamp-frog, Yoda, as great wisdom.

Jar Jar was the whole essence of Star Wars. He was awkward but trying his best in a complex galaxy, pitted against vast forces of evil. Unlike the po-faced Jedi he didn’t have magic on his side. He made mistakes but was capable of surprising feats under duress. He was funny and warm and slightly hapless. Meesa Jar Jar. We allsa Jar Jar. ”