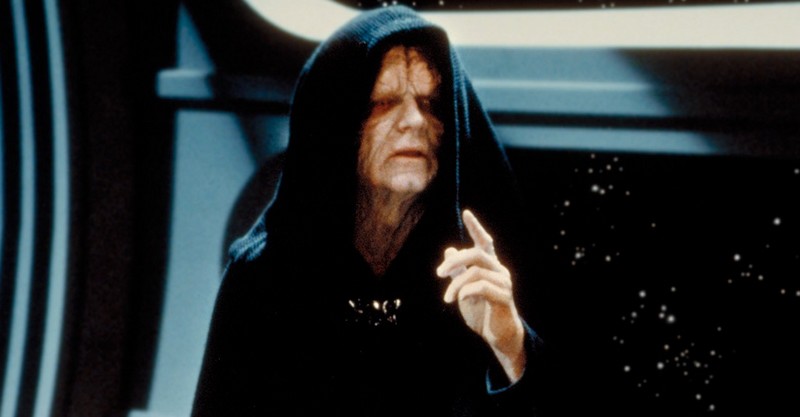 JediPaxis from the Reddit forum had several verified scoops about Star Wars: The Rise of Skywalker. Today, he posted a “basic plot” of the movie assembled from his sources. Click here to read it in its entirety.

Here are just the bits about Emperor Palpatine, including a family connection with Rey. Remember that it’s still a rumor for now.

“[…] Using the coordinates found within the wayfinder device, Kylo arrives in the Unknown Regions. Here, Kylo encounters Emperor Palpatine. How Palpatine is still alive and how he ended up in the Unknown Regions is still a mystery to me that I hope to learn more about in the next few months (Note: Daisy Ridley recently said in an interview that it’s explained in the film), but my source on this tells me that this is indeed Palpatine in the flesh. Kylo and Palpatine’s conversation apparently centers around ordering Kylo to find Rey and bring her to the Emperor with the goal of turning her to the dark side.

[…] During [a duel between Kylo and Rey], Kylo adds another wrinkle to Rey’s backstory. He maintains that while her parents are nobodies, her grandparents (more specifically her grandfather) wasn’t. Kylo tells Rey that she is the granddaughter of Papatine. This explains his interest in bringing the random nobody from Jakku into the fold. […]

Rey leaves Ahch-to and travels to the Sith fleet in the Unknown Regions. Eventually the Resistance fleet arrives and battle ensues. Somehow, Rey finds her way to The Emperor who has been waiting for her. Palpatine confirms that what Kylo told her was true. Apparently after his defeat at DSII, Palpatine was shaken by the fact that he wasn’t able to maintain his hold on Vader or seduce Luke to the darkness due to their familial bond. During the course of their conversation Palpatine makes reference to this bond between Vader and Luke and likens it to his bond with Rey hoping that whatever familial connection they have will be enough to win her over and become as strong as that of the Skywalkers. Note: What my source described next feels very reminiscent of RotJ. Rey is trapped in The Emperor’s throne room, watching two opposing fleets battle while she is helplessly gazes onward. It’s at this point that Kylo/Ben reappears. How we get to this next part is still a bit fuzzy to me, but apparently Ben and Rey join forces and begin attacking Palpatine. Leia’s lightsaber comes back into play when Rey and Kylo share the Skywalker lightsabers throughout their fight. At some point the Emperor overpowers them both and supposedly kills Ben. (Note: there have been reports from other reputable leakers that Kylo kind of/sort of dies, but my source on this seemed pretty unambiguous. Personally, I think we’ll just have to wait and see what we learn over the next few months.) When it looks like all Hope is lost, the ghosts of Luke and Leia show up to aid Rey. Together they overpower the Emperor and end his darkness once and for all. […]

The last thing I was told is regarding the final sequence of the film. I don’t why, but our heroes travel to Tatooine. During these scenes, it is supposedly revealed that Rey has cannibalized Anakin/Luke’s lightsaber and Leia’s to make one of her own that supposedly has a yellow/gold blade. She buries the leftover pieces on the grounds of the former Lars homestead. The final shots of the Skywalker saga allegedly echo how the adventure began in ‘77, our heroes gazing at the horizon dreaming of the future as twin suns set in the distance.”