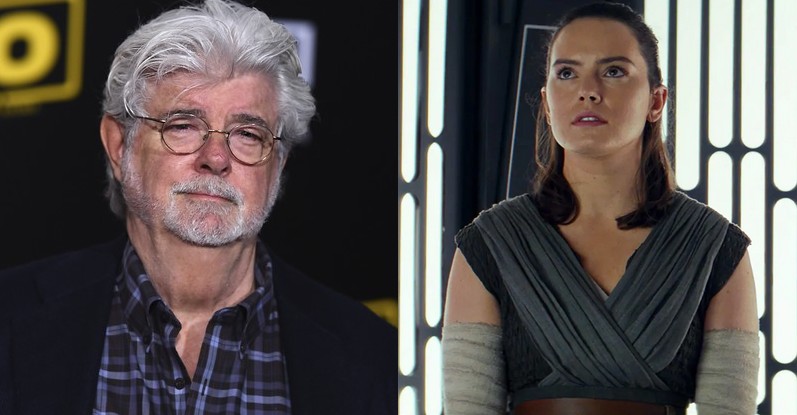 “Lucasfilm president Kathleen Kennedy may well be the most powerful woman in Hollywood, and she’s hardly a newcomer to the world of blockbusters, serving as Steven Spielberg’s producer since 1982’s E.T. That partnership extended to Spielberg’s collaborations on the Indiana Jones movies with George Lucas, who anointed Kennedy as his successor in 2012 as he negotiated a sale to Disney. […]  In October, two weeks before Game of Thrones’ David Benioff and D.B. Weiss pulled out of a year-old deal to develop a new Star Wars trilogy, Kennedy called Rolling Stone to discuss December 20th’s Star Wars: Episode IX: The Rise of Skywalker, and a post-Skywalker-saga cinematic future for the franchise that remains wide open, even as Last Jedi director Rian Johnson and Marvel’s Kevin Feige develop potential films. […]

Thanks to Bob Iger’s new book, we now know in some detail about George Lucas’ dissatisfaction with The Force Awakens. What are your feelings about that?
Personally, I’ve had a relationship with George going back to all of us meeting before making Raiders of the Lost Ark. So this is a long, 35-plus years that I’ve known George, and I continue to be very, very good friends with George. And I think there’s plenty of examples where people create something that is fundamental to who they are, where it’s difficult letting go and watching that become something different. So I think initially, that was difficult for George — I don’t think he anticipated how hard that would be. And J.J. came into it with such enthusiasm and, frankly, reverence for Star Wars and for George, and had to find what was personal for him. He had to make it his own. Every director who comes into a movie has to make something their own; they have to find themselves in the storytelling. And then that’s going to become a different point of view. And I think that’s all George was reacting to.

He may not agree with every choice J.J. made. He may not agree with every choice Rian made. But he appreciates the filmmaking. That I know. And he so appreciates, for instance, what ILM [Industrial Light & Magic, Lucasfilm’s visual-effects arm] has done in the work of these movies. I mean, that’s a company he created. And he just continually tells me how astounded he is by how far things have come and how, now, whatever comes into your mind can be achieved. And he came down, for instance, on The Mandalorian to see what we were doing — he’s worked a long time with [director] Dave Filoni. And he’s known [series creator] Jon [Favreau]. And he was just like a little kid on that set when he was watching what we were doing. So I see him get caught up in this again, and I think there’s a little bit of regret that he’s not on the stage and directing movies and in it still. And that may filter into it as well. I can’t really speak on behalf of what George is feeling all the time. But I know that he’s very, very proud of what he created. And to see people go on and enjoy this now into almost 2020 is pretty remarkable.

Is there any universe in which George can be lured back for some kind of one-off or just to do anything?
I doubt it. But listen, I think that would be fantastic, if he would be interested in doing that again. But I doubt it. He’s loving doing his museum [Los Angeles’ the Lucas Museum of Narrative Art] right now. That’s a huge project, which is going to be absolutely fantastic. It’s a narrative museum, so it really keeps him engaged in storytelling. I think he’s loving that and he’s loving his little girl [six-year-old daughter Everest]. So he’s pretty fulfilled.”