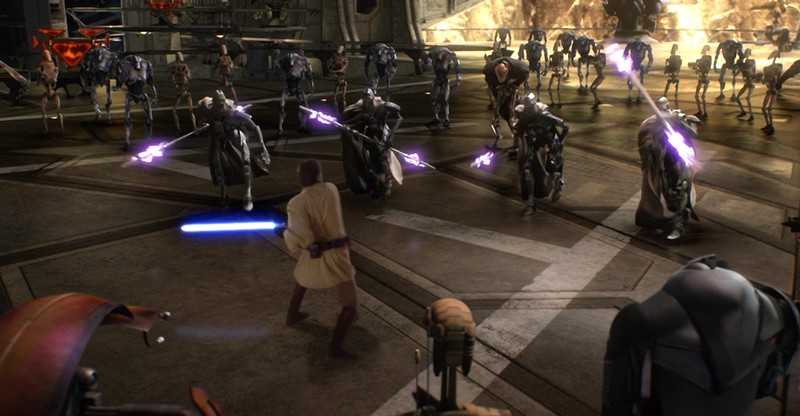 “The best lightsaber fight in the Star Wars franchise may be one that you never saw.

That’s the opinion of stunt coordinator Nick Gillard, who helped choreograph the fights throughout the prequel trilogy.

Gillard was discussing the lightsaber battle in The Phantom Menance when we mentioned that the Darth Maul vs. Obi-Wan and Qui-Gon three-way bout is considered by many fans to be the best laser sword contest in the entire saga.

Then Gillard surprised us by revealing: No… there is another…

There is “a better one” fans never saw, Gillard said — a Revenge of the Sith fight in which Obi-Wan takes on six of General Grievous’ bodyguards at the same time.

Star Ewan McGregor trained for weeks just to get Obi-Wan’s choreography down for the complicated sequence. But when it came time to film, the production was running short on time. Since the fight wasn’t essential to the story line, George Lucas invented a simpler to eliminate the bodyguards: Obi-Wan uses the Force to crush them with a piece of the ceiling.

“It was the most complicated fight we ever did, and George said, ‘I’m really sorry, I’m going to drop a container on five of them!’”