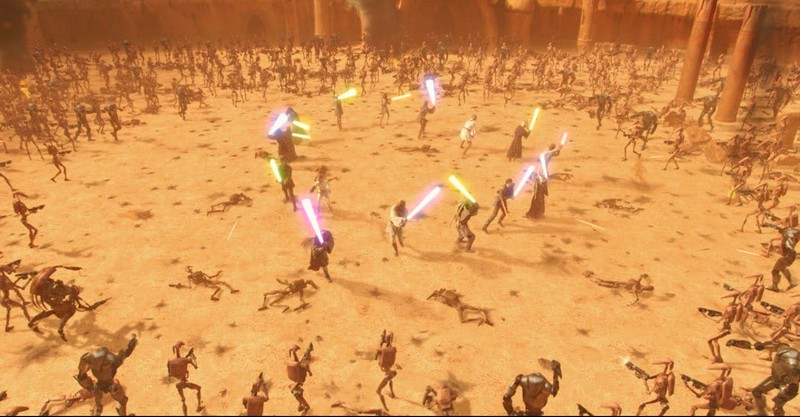 “Ask any Star Wars fan to name things about the franchise that they love and, while fans may not always agree on a lot of things, there is one thing that comes up pretty often: the battles. And who can blame them? Star Wars: A New Hope had its share of some great battles, but when it comes to the more personal fights as opposed to the epic space combat, the original trilogy kept things small. There was no mistaking that a lightsaber duel was serious business and kept viewers on the edge of their seats but, for all of the excitement of those original trilogy conflicts, they lacked a sense of scope.

That all changed with Star Wars: Attack of the Clones. That film, the second in the prequel trilogy, not only delivered fans the beginning of the Clone Wars, a highly influential event in the Star Wars universe, but also a massive Jedi fight unlike anything the franchise had seen before — a moment that changed every major fight in the franchise going forward.

As a quick refresher, Star Wars: Attack of the Clones sees a group of 212 Jedi, including Mace Windu, being tasked with rescuing Obi-Wan Kenobi after having been captured and sentenced to death by Sith Lord Count Dooku following the discovery of a secession conspiracy. What ensued was a huge arena battle that marked the beginning of the three-year Clone Wars, but also was the first major battle the Jedi had fought in years. From a plot perspective, that Battle of Geonosis is hugely influential. Even as we watch it unfold on screen, we know the ultimate outcome, thanks to A New Hope.

That battle in Attack of the Clones isn’t just a turning point for the narrative, as, visually speaking, it’s a huge shift for the Star Wars franchise. Until that moment, nothing on this scale had ever been seen in Star Wars that wasn’t a battle between various ships and aircraft. This battle flips that and brings the epic nature of battle down to the ground and makes it personal and does it in a grand way. That fight scene fills every inch of the screen with incredible action, and that’s before you even consider the effects. It’s intricate, it’s huge, and manages to pack in the same huge presence one expects from a large battle while simultaneously keeping it tight, close, and personal.

There’s also the fact that this kind of combat seemed impossible from a story standpoint. In the original trilogy, Jedi were very rare with the Jedi Order having been nearly exterminated and surviving Jedi were more or less on the run. The situation was a bit different in Star Wars: The Phantom Menace, as it takes place at a point in history where the Jedi were in their prime, but it’s also one in which we don’t really see the Jedi as the warriors they are said to be in large scale. The concentration — and subsequent battles — are still kept small. That shift from smaller scale conflict to the full-on Battle of Geonosis is part of what makes that scene so pivotal. We finally see the Jedi at the height of combat and know exactly what they are capable of, something that is especially valuable considering that we don’t actually see the Clone Wars depicted until the animated television series Star Wars: The Clone Wars.

The Battle of Geonosis also changes things for the franchise emotionally, as well. We already know by the time we get to A New Hope that bad things have befallen the Jedi, but the battle lets us see in no uncertain terms how brutal and devastating it all is. The execution of Order 66, an order that identified all Jedi as traitors to the Galactic Republic, thus sentencing them to execution through the use of control chips in the brains of clone troopers, isn’t actually seen until Star Wars: Revenge of the Sith, but having seen the Jedi at the height of combat makes the punch of them being taken out by troopers even harder to bear.

The Battle of Geonosis is a major turning point in the Star Wars franchise not just for the canonical events that follow it, but for how it brought into sharp visual focus just how significant the moment was. It’s visually stunning, narratively critical, and, from the standpoint of the viewer, emotionally devastating, especially as the final chapter is set to unfold, generations later.”